The Longmont Buddhist Temple had its origin in 1925 as the Longmont Kyudokai.  In January 1925, the organization had its first meeting at the home of Kikutaro Mayeda, east of Erie, Colorado.  The founding members were Kikutaro Mayeda, Kunihei Miyasaki, Daijiro Furuiye, Motozo Matsuda, Seizo Fukaye, Goroku Kanemoto, Toyokichi Kawano, and Kamekichi Shimoda.  These individuals, their families and other members of the Japanese community comprised the total membership of some 20 families in the Longmont and Lafayette area. 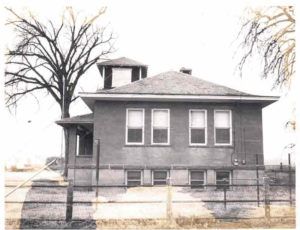 In May 1929, the members erected Showa Hall, a small frame two room building in a rural area three miles north of Lafayette on Isabelle Road, just west of Highway 287.  The building was called “Showa Hall,” named because it was built during the Showa Period of Japan.

At Showa Hall the community held Buddhist services once a month on Saturday evening since the farmers were busy working during the day.  The Sangha later became a branch of the Tri-State Buddhist Temples with services held on a monthly basis.  There were only two ministers to conduct services, so they could only come to Longmont once a month.

They also conducted Japanese Language class during the summer vacation in an effort to keep their children aware of their heritage. Jane Kanemoto recalls going home for lunch, and on their way back to Japanese school, they walked through Mr. H’s cabbage field and stepped on the plants.  That afternoon, the doors to the Temple flew open and there stood an unhappy Mr. H.

Agriculture provided the livelihood for most of the members.  As they became more established they were able to invest more into their religious and social needs.  In 1955, an ornate Buddhist altar, Obutsudan, was ordered from Japan.  Upon its arrival, all members gathered to observe a dedication service of this worthy accomplishment.

The Nisei (second generation Japanese) members married and began their families.  Each wedding was a big event with everyone cooking and preparing food all day before the wedding.  Mr. Yamamoto would stay overnight at the temple to watch.  Weddings were held at home or church, and later couples would be married at the Tri-State Buddhist Temple.

With the limited number of children, mothers took turns driving their children to Brighton Buddhist Temple for Dharma School.  In 1966, the mothers and other members of the Longmont Temple joined forces to start their own Dharma School.  Tri-State Buddhist Temple could not provide a minister on a weekly basis, so on those weeks when ministers could not attend, Jack Miyasaki and Jane Kanemoto conducted services for the children.  Classes were also taught by the Nisei parents.  In recent years, Lynn Lum taught Dharma School classes from 2005-2009, Mike Shibata taught classes from 2009-2016, and Kelli Koga began teaching classes in 2017.

During that time, the Reverend Mrs. Mutsuyo Tsunoda taught the young girls odori (Japanese dances) which they performed at Hanamatsuri (Flower Festival) in Brighton and Denver.  The Flower Festival commemorates the birth of Gautama Buddha.  The Longmont dancers also performed at cultural events when Mrs. Tsunoda was invited to present a Japanese program. 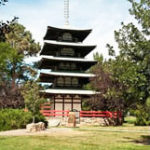 The members of the Temple have contributed to many community projects and participated in many community activities.  They have donated funds for the reception room for the hospital, donated land for a school, park, fire station, school administration building, St. Vrain  River Greenway, and the site for the Episcopal Church.

In the city of Longmont, the Kanemoto families built a five story pagoda which was presented to the city as the Tower of Compassion.  It was erected in Kanemoto Park donated by and named after the Kanemoto families.  In 1972, the pagoda was accepted by the city as a symbol of the gratitude to the citizens of Longmont for the friendship and opportunities extended to the Kanemoto Families since their arrival in the Longmont area in 1919.  The inscription of the Tower of Compassion reads:  “Compassion is living the life of love, empathy, understanding, and gratitude of all things, and giving unselfishly of oneself for the happiness of all beings.”